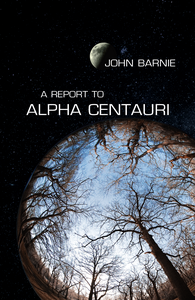 The sense of awe. not only at the grandeur of the universe but also the insignificance of our species is centre-stage in A Report to Alpha Centauri. And John Barnie sets out his stall early, warning, in the poem ‘To the Reader’, that you may want to walk away since, ‘…these poems are out there with the chilly wind / and the absence of yellowhammers, with drills and wrecking balls,…’ But anyone with eyes to see and ears to hear should surely stay, not to be comforted but to face the challenging questions, the unflinching honesty and the blazing anger at the hubris that is destroying so much life; life that even in what Conrad calls ‘a soulless universe’ still matters. Barnie calls us to ‘just look’, knowing that like all prophets he is ’… the stranger, the one / walking in the wrong direction.’ (Lock-step)

Serious and sometimes tinged with despair at humanity’s perverse race into self-destruction, captured in striking imagery that lingers, there is also a large and intelligent wit at play here that pours out in wry comments and melancholic humour. At heart, A Report to Alpha Centauri is a eulogy. Sharp, urgent and ultimately humane, this is not poetry that any of us should turn away from.

Listen to John reading at a Cinnamon Press event: