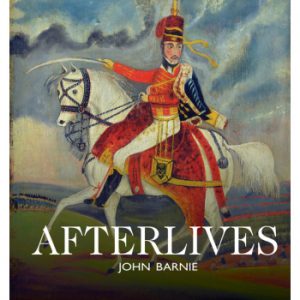 Afterlives sees John Barnie engaging with images once again, as he did in his book A Year of Flowers. Here, Barnie deploys his skills of perception to respond to a group of paintings in Peter Lord’s art collection. These are images that have been familiar to Barnie for years, yet he approaches them with characteristic freshness and humanity. There are no mere descriptions here. Rather, Barnie inhabits the images, speaking from within or engaging with their subjects as a persona just outside the frame. And as he does so, we are taken on a narrative journey, gaining insight into not only how poetry and art interrogate one another, but how each image, peered at ‘through thick cracking varnish’, reveals layers of history and the mores that accrete into hierarchies, prejudices, injustices and the inability to read one another across cultural gaps. The poems in Afterlives reverberate with the ghosts from the pictures, whose roles are still being played out in the divisive echo-chambers of today’s insiders and outsiders. Rich with social commentary, delivered with wit, and sometimes a hint of mischief, there is a serious intent at work here: the voice of those who know ‘whose tragedy they are in’ — ‘their own’. And who know also that they: ‘will defy anything / that gets in their way’.