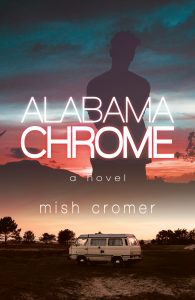 With nothing but a collection of vinyl records without a player, a shoebox of memories, and a lot of secrets, Cassidy is used to being alone. But when his camper-van breaks down in a snowstorm and he is rescued by a kind young woman, Lark, he finds himself working in a small-town bar and becoming part of the community. But with the arrival of an inscrutable new waitress, Reba, Cassidy finds himself unsettled by a sense of recognition. And there are further complications as Brooke Adler, reality TV host and hero of the town’s inhabitants, arrives unexpectedly to shoot a new show. Cassidy is drawn into protecting Reba from the ghosts of her past only to discover that his own ghosts are chasing him and that he must find the courage to speak the truth, or risk losing everything, again.

A story of family, both given and found, and the long shadow of domestic violence, Alabama Chrome interrogates the masks of the modern world, and what true kindness means. 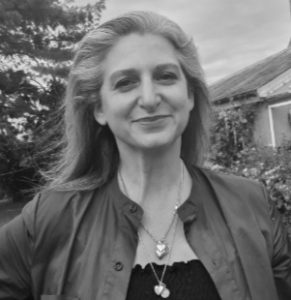 Mish Cromer is a writer and person-centred therapist from London. Drawing on her cultural heritage of Greece and the USA, she writes novels about the complexities of family, with a focus on women’s narratives and the meaning of home. She has a BA (Hons) in English Literature from the University of North London and worked as a Montessori teacher before training as a therapist. She has three children and lives in London with her husband.

Mish’s second novel, All the Places that were Hurt is forthcoming with Cinnamon in November.