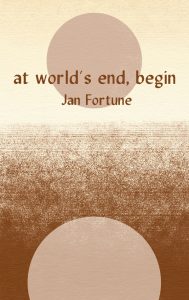 How do we come home in a strange land?

Moving to a remote forest hamlet in a new country in the midst of a pandemic, the only way to connect is to take the time to linger, listen and observe—to be with the land that is becoming home. From this observations a series of haiku arise, following the Japanese system of 24 seasons divided into 72 micro-seasons and interspersed with eight lyric poems that travel around the Celtic wheel of the year. And so a forest garden and its surrounding Finistère woodland slowly reveals itself, weaving together the lunar and solar, melding the Celtic shape of the year with the increments of the Japanese solar terms, each one unveiling a new aspect of change.

Charting a life unmoored from the familiar, but permeable to the new the poems find their place at ‘the end of the world’, as the Romans called Finistère, but also in Penn-ar-Bed, the Breton name which is both the end and start of the world.

Most endings are also beginnings and here in these precise, exquisitely observed poems, we find ourselves both unsettled and settling, exploring what it means to hold together being adrift and belonging; cycles and transformation and how we find a beginning at the end of the world.

Jan Fortune was born in Middlesbrough and grew up in Redcar. She read theology at Cambridge and completed a doctorate in feminist theology at Exeter University. Jan has worked as a teacher, priest (ordained at the first ordination of women to the CofE) and charity director. She is the founding editor of Cinnamon Press and has edited around 400 books and led numerous creative writing courses in the Wales, the UK (including courses for Arvon and Ty Newydd), Spain, France, and online. She mentors writers from beginners to highly experienced, across genres and hosts a writing community, Kith, that includes weekly prompts, courses and inspiriation for the writing life via her site Kith: for a different story.

Her previous publications include non-fiction titles in alternative education and parenting and the major book book for writers: Writing Down Deep: an alchemy of the writing life (available as both hardback and paperback editions) ; the novels Dear Ceridwen and Coming Home. Her previous poetry collections include Particles of Life (BlueChrome), Slate Voices (a collaborative collection with Mavis Gulliver), Stale Bread & Miracles, Edge (a companion to Adam Craig’s Year W), and Turn/Return, a pamphlet inspired by Brian Eno’s Oblique Strategies cards. Her most recent work is the Casilda Trilogy of novels, This is the End of the Story, A Remedy for All Things and For Hope Is Always Born, and Saoirse’s Crossing is the spin-off, stand-alone novel from this sequence.