Novelists create whole worlds, sometimes ‘realistic’, sometimes fantastical, but always taking us into the lives of others. Mark Godfrey (The River Reflects), Omar Sabbagh (Via Negativa), and Carole Strachan (The Truth in Masquerade, A Song of Thyme and Willow) explore how characters and their concerns suggest themselves to writers and the worlds that evolve around these characters.

Writing without lines — the art of prose poetry is a sometimes marginalised and contentious area of poetry. In this online event, Maria Jastrzębska (The True Story of Cowboy Hat & Ingénue), Jane Monson (The Chalk Butterfly) and Jan Fortune (Stale Bread & Miracles) read from their prose poetry collections and discuss the place and range of prose poetry. 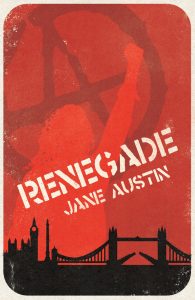 Launched recently, Renegade by Jane Austin is compelling story of 70s rebellion, revolution in Rojava and a family in a tailspin; a tale that touches the beating heart of our times.

Jane says about writing this novel:

“In writing Renegade, I look into the soul of a bomb-throwing anarchist in the 70s who convinces himself he’s on the right side of history, even after it all goes horribly wrong. Justin as a young man tries to throw off middle class chains to become a class warrior. Looking back at himself through the lens of time, he thinks of his workmates, and ‘nursed his soul with youthful memories of working alongside men with the weight and heft of authenticity, something he’d lacked his whole life.’

I wrote the novel drawing on my experience as an activist and as someone who lived through tidal waves of social change. I wanted to explore how global events can ricochet down t 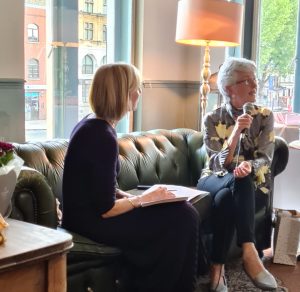 he generations in unexpected ways. Justin’s youthful libertarian ideals are reflected in his son Sanjay, drawn into radical politics by his lover, who joins a Kurdish women’s militia to fight ISIS.

It’s a story of human frailty, regret and atonement and how our actions however large or small can change the lives of those around us.”

The launch of Renegade was well-attended and the book is on sale on the Cinnamon site, online platforms and, if you’re in London, in the Brick Lane Bookshop, as well as being available to order in other bookshops. Introducing the launch, Jane’s editor, Rowan Fortune, said: 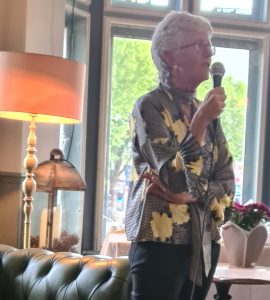 The launch of Jane Austin’s Renegade was a well-attended author-interview discussion of the book’s key themes, as well as the broader writing process, interspersed with vibrant and tantalizing readings. Renegade tells the story of Leeds professor Justin as his radical, militant anarchist youth in the 70s resurfaces to haunt his contemporary academic and married life. The consequences for Justin and his family challenge both him and the reader to reflect on redemption, the meaning of the past and the importance of identity in times of political turmoil. After the readings, the audience asked diverse questions touching on the nature of class in the delivery of justice and all the way to the tricky details of a novelist researching a bombing campaign.

Read Renegade Chapter 1 and get hooked on this high stakes story. 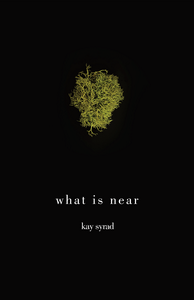 Our last launch for September was an extraordinary evening of readings and questions with Kay Syrad, a poet, novelist, and editor who also collaborates with performers and artists, who was launching what is near. As the poetry infolded the audience poured out praise in the Zoom chatbox – words like sublime, clever, moving, terrifying, beautiful and tender. This is a collection that faces the horror of what humanity is doing to the planet. It’s unflinching, not afraid to see the absurd irony of ecological breakdown, but also a plea to disrupt this slide into our own oblivion that is wiping out so many other species in the process. It’s a powerful collection, yet also one that speaks with lyrical beauty, insisting that we name what is being lost or allowing language and form to unravel in those moments when there are no words for what is unspeakable.


If you missed the launch or would like to view it again, you’ll find in below and the discount code is good through October 2021.

One of the unlooked for gifts of virtual launches has been the ability to bring together not only an audience from different parts of the globe, but also to have authors from different places in one virtual space, sharing their work and creating encounters enriched by both the different and similar threads that weave into and out of their narratives.

This was certainly the case tonight at the launch of Aldermaston by Kate Hoyland and The Pathless Country by James Harpur.

Set in both the future and the past with the strapline: the future is a thing of the past, Aldermaston journeys with Jean, an archeologist of a future, wading through a drowning world and determined, at the end of her life, to find a time capsule from the 1950s.  And it travels also with Ida, 19, searching for a life that breaks the stultifying conventions of post-War Britain and burying a time capsule, a love letter to the future, before joining the first ban the bomb protest in 1958.

Set in turn of the century cosmopolitan London among the glamour of theosophical circles and in rural Ireland in the early part of the First World War and the lead up the 1916 Easter Rising, The Pathless Country walks with Patrick Bowley as he preaches peace and makes an epic pilgrimage, discovering the true nature of ‘the pathless country’.

Both books feature protagonists who are prepared to challenge the societies they find themselves, prepared to find lonelier yet more authentic routes through life. Both raise questions about the nature of self, service and meaning and both place strong emphasis on landscape as a character that interacts with these important questions.

If you missed the launch you can catch up with the video here and the discount code in the video is good through October.