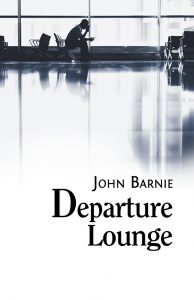 Departure Lounge returns to the theme of mortality with characteristic insight and honesty. Concerned not only with how we characterise and cope with death, but with a sense of urgency for all that is being lost, culturally or ecologically, this is deeply intelligent collection. Accessible, yet exacting; lyrical, but without a wasted word, these poems unspool in single, unassailable sentences that ring with truth.

… these small, specific celebrations which make ‘Departure Lounge’ less like a dirge than a jazz album. There is something of the book of Ecclesiastes in the overall tone: eat, drink and be merry, for tomorrow we die. Yet Barnie’s poetry does not advocate hedonism. Rather, he suggests we care for the earth, watch out for our neighbors, and seek out beauty, as he himself has done. ‘Poets,’ he writes, seek ‘a handful of words they hope will shine.’

I like their funeral director style,
their smart can-do with a touch of violence
as they swoop to the lawn for crusts

scattering sparrows;
they only know what they need to know
and were you dead they’d fly down, too,

sizing you up, folding themselves
like black umbrellas
while they strode around.

John Barnie is a poet and essayist from Abergavenny, Gwent. John lived in Denmark from 1969-1982 and was the editor of Planet, The Welsh Internationalist from 1990-2006. He has published several collections of poems, mixed poems and fiction, and two collections of essays, one of which, The King of Ashes, won a Welsh Arts Council Prize for Literature in 1990. His collection Trouble in Heaven (Gomer, 2007) was on the Wales Book of the Year 2008 Long List. Cinnamon Press has published several previous collections:The Forest Under the Sea, The Roaring Boys, Wind Playing with a Man’s Hat, and Sunglasses as well as his latest collections, the richly illustrated Afterlives and A Report to Alpha Centauri. Cinnamon also published the memoir, Footfalls in the Silence and an anthology of poetry and prose in honour of John Barnie, Wired to the Dynamo, edited by Matt Jarvis.