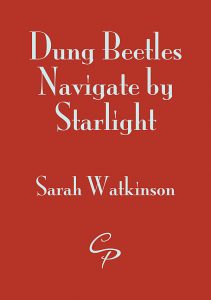 “‘Can you gather birds with an aviary, / or a bestiary by building a zoo?’ Sarah Watkinson’s poetry is alert to the gorgeous precisions of the natural world and the shapes and shades of season. I found this collection utterly beguiling: there was not one poem I did not admire, and many that startled me into seeing and hearing things afresh. Bravo.”

These poems explore the boundary between science and poetry, and juxtapose the lexicon of organic chemistry, in particular, with a botanical discourse which is more conventional in poetry, but which the scientific treatment defamiliarises. Far from being abstruse and heavy, the treatment here lightens the subject with an imaginative playfulness, as in ‘The First Green Human: The Observer Interviews Clorinda’, where Marvell’s pastoral character is turned, through a journalistic register, into a personification of current ecological concerns.

“Sarah Watkinson invites us — through poems that are both playful and learned — to contemplate the manifold connections between human and other life forms, from dung-beetles and sheep to mosses and moulds. Her work delights in non-verbal devices (an epigraph in the form of a molecular diagram, eponymous poems in the forms of different trees), as well as in skilfully-deployed technical terms whose effect is to tease and intrigue rather than mystify. Replete with poetry that is quick-witted and emotionally as well as intellectually expert, this is a chapbook to appreciate, admire and enjoy.”

“Sarah Watkinson is a plant scientist with a specialist interest in fungi and rot as agents in bio-recycling, yet she uses her technical language in a way that is totally poetic. She uses her knowledge in a way that takes us more deeply into the mystery of things than sensibility alone could do. I like poetry like this that teaches me things as well as stirring my mind, my imagination and my feelings. There is wonder, horror and humour in these poems, all firmly grounded in understanding and fine observation. She has an unusual feeling for language, her metaphors showing the same precision as her scientific terminology, all at the service of her humane imagination — where imagination is the Coleridgean capacity to perceive things as they are. I am stirred and impressed by this debut.” 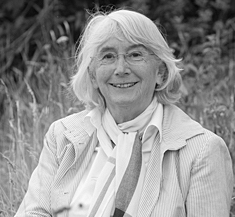 Sarah Watkinson is an emeritus research fellow in Plant Sciences at Oxford University, where, throughout a career as a lecturer, she specialised in the activities of microscopic fungi that sustain forests, and rot and recycle remains. Since acquiring a Diploma in Creative Writing in 2012, she has been writing and studying poetry, and realising how both poetry and science involve imagination in pursuit of understanding. Her poetry has appeared in UK anthologies and magazines including Litmus, Pennine Platform and The Rialto, and has been successful in several competitions. Dung Beetles Navigate by Starlight is her debut pamphlet. Earlier published work includes three editions of a co-authored textbook, The Fungi, and numerous scientific papers. With Jenny Lewis she organised SciPo in 2016, an event in Oxford for Science Poetry which attracted an enthusiastic attendance. She lives near Oxford and in Northumberland.