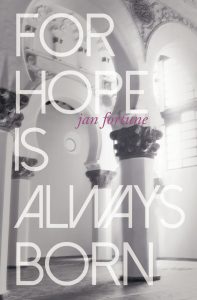 The astounding conclusion to the Casilda Trilogy…

Epic and personal; strange and political; magical and true

What is the connection between the tenth century Moorish princess, Casilda, and a young Jewish woman, Miriam, completing a Masters degree in contemporary Toledo? What links her to the Spanish singer, Casilda Faertes and her mother, another Miriam, born in Budapest and raised in Nice?

Spanning a thousand years and bringing together the stories of three generations of women in North-east England, Budapest and Spain, For Hope is Always Born, follows on from This is the End of the Story and A Remedy for All Things to ask huge questions about identity and the nature of love and loss.

Like Yann Martel’s The Life of Pi, what matters in For Hope is Always Born is not about what is real but what is ‘true’, even when the truth seems impossible. Taking it’s cue from Don Quixote’s claim that “maddest of all: to see life as it is, and not as it should be” the story explores the impact on individuals and through generations when the personal and the political collide.

The trilogy begins with This is the End of the Story and A Remedy for All Things.