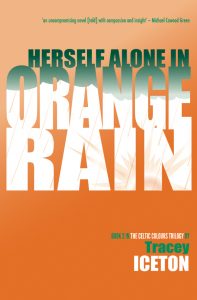 Kaylynne Ryan is a promising art student, used to fighting for her place in a world of men, but when a forgotten friend turns up she realises there is more than her own freedom at stake.

Learning the truth about her Irish heritage, her grandfather who fought all his life for Ireland’s independence, her parents who gave their lives for the same cause, she finds herself drawn into the dangerous world of the Provisional IRA with its bombing campaigns, bloody violence, hunger strikes and patriotic sacrifice. She didn’t look for the Troubles, but they found her nonetheless, and now, whatever the cost, she must join the cause to help rid the Six Counties of the Brits.

Book 2 in The Celtic Colours Trilogy, Herself Alone in Orange Rain tells the story of one young woman’s fight for freedom and independence, for her homeland and for herself. 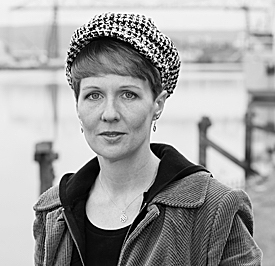 Tracey Iceton is an author and creative writing tutor from Teesside with a PhD in creative writing from Northumbria University. A qualified English teacher, experienced in delivering creating writing courses and workshops, Tracey won the 2013 HISSAC short story prize for ‘Butterfly Wings’, was runner up in the 2013 and 2014 Cinnamon Press short story competitions with ‘Slag’ and ‘As the world (re)turns’, which appeared in the anthologies Journey Planner and Patria. She also won the 2011 Writers Block NE Home Tomorrow Short Story Competition and has been shortlisted for the 2012 Bristol Short Story Competition with ‘Apple Shot’ and the 2015 Mslexia Women’s Short Story Competition for ‘Ask Not’. Green Dawn at St Enda’s was Tracey’s debut novel and part one of her Celtic Colours Trilogy, published by Cinnamon Press in 2016. Herself Alone in Orange Rain is the second book in the trilogy and came out in 2017. This final part of the trilogy, White Leaves of Peace, was published in 2019.