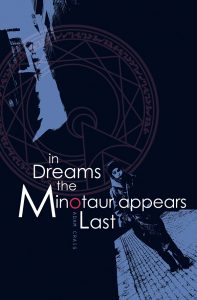 In darkness, she walks the labyrinth.

In the Paris of 1970, the hippie revolution has yet to crash land and Minnette searches hungrily for a way to enlightenment. She finds it. Or she finds something and the path of her life is set. But, by the beginning of the 21st Century, Minnette is haunted by the shades of recurring dreams and recurring memories, unsure whether the city around her is as solid as it appears. She looks back on her life’s search—and on a winter’s evening in Toledo when, for a moment, the gates to another world may have opened—and feels the defeat of a life thrown away. But something moves in the shadows, something that comes closer each evening.

In Dreams the Minotaur Appears Last is one of the most entrancing novels I have read for a long time, not least because of the beautifully crafted prose and skilfully structured narrative thread that leads readers on a tangled track through the maze of its protagonist’s life. As a character, Minnette is all too real as both a woman seeking love and an enquirer seeking true enlightenment. Craig’s unfolding if her life story through the disjointed narrative cleverly leaves readers experiencing the same confusion over what is real and what isn’t as Minnette herself suffers during the course of the spiritual quest which takes her from hippy Paris to quaint Toledo, where the pivotal moment of seeing and believing occurs for her, on to the grimness of Leeds and back to Paris. I felt the tragedy of her dissatisfaction powerfully throughout the novel and was torn between great sympathy for her and extreme frustration — the complex reactions that readers only have when reading exceptional fiction. This is a novel for those interested in the effects a life in search of magical truth can lead to but it is also, more importantly, a novel for those who want to see how to push the creative limits of prose fiction. 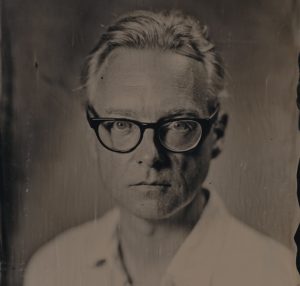 Adam Craig is a writer, editor, mentor, photographer and graphic designer. His debut novel was Vitus Dreams, an experimental novel that explores loss and language. His longstanding interest in mysticism and the occult is reflected in this second novel, In Dreams the Minotaur Appears Last, and in his short story collection, High City Walk, which features the story ‘Marietta Merz‘, a special edition chapbook. and a counterpoint to the novel, A Locket of Hermes. and a bridge to his latest novel, Child of the Black Sun.