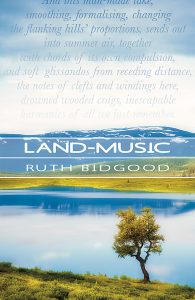 Land Music / Black Mountains is a tête-bêche poetry collection bringing together an important body of themed work with exciting new poetry by Ruth Bidgood, and with an afterword by Matthew Jarvis.

Land Music sees Ruth Bidgood writing at the top of her powers. Fluent, yet unerringly exact, always searching for new perspectives, we move with the poet from landscape to memories, each evoked with such precision that we enter them fully. This is a world in which nothing is insignificant, from the tiles of pre-Raphaelite girls by the fireside which spell ‘the unpredictability / of beauty’s manifestations’ to the visual trick of leaves in the wind that seem to conjure a lizard on a window-pane, over in an instant so that ‘Nothing was left but the possible, / believable: sense / of something withdrawn before fully seen, / a small deprivation.’ Above all it is a world in which land and place are central and will persist:

yet in wilderness places, life,
with a new defiant crying,
might launch again
its tiny assault on the void. 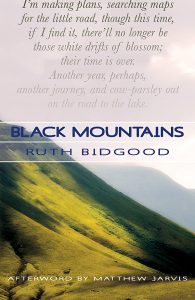 Drawn from previous collections spanning forty-four years, Black Mountains represents a strong thread through Ruth Bidgood’s poetry, described by Matthew Jarvis as poems that are ‘absolutely well-balanced, gently languaged into being without fuss or pyrotechnics’. Never embracing an Arcadian pastoral, Ruth Bidgood writes with extraordinary depth that is matched by measured control. One line flows easily into the next taking us to the heart of places that reverberate with memory and with a sense of how each moment is inextricably bound with the past.

Intensity of attention, to the truth both of what is seen and of what is felt, is Ruth Bidgood’s distinctive quality. … These are daring poems, open to speculative thought. And, crucially, they place truth of experience above the ‘dust motes’ of convention, combining deep feeling with keen intelligence. 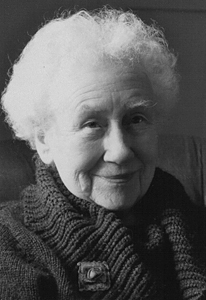 Born in Seven Sisters, Glamorgan, Ruth was educated in Port Talbot before reading English at Oxford University. During World War II, she served as a Wren in the Middle East. She was sub-editor of Chambers’ Encyclopedia. After many years in Surrey, Ruth returned to Wales and settled in Abergwesyn where she started to write poems and document local history.

Her work has been published in various journals and collections. Not Without Homage (Christopher Davies, 1975) received a Welsh Arts Council award; and both Selected Poems (Seren, 1992) and The Fluent Moment (Seren, 1996) were shortlisted for the Welsh Arts Council Book of the Year Award in 1993 and 1997. Her New and Selected Poems (Seren, 2004) was shortlisted for the Roland Mathias Prize in 2005 and Time Being (Seren, 2009) won the Roland Mathias Prize for 2011 and was a Poetry Book Society Recommendation. Ruth is a Fellow of Academi. A full-length study of her work was written by Matthew Jarvis. Her previous collections with Cinnamon Press include Hearing Voices (2008), Above the Forests (2012) and this beautiful tête-bêche double collection, Land Music / Black Mountains. Her latest collection is the pamphlet, Lights.