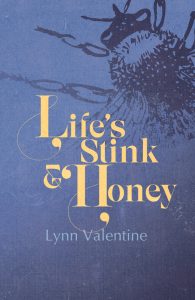 Lynn Valentine is a distinctive new voice in Scottish poetry. With hints of fairytale and gothic, she writes precise and poignant poems embracing what is often overlooked or peripheral – a father who drives the snowplough, a childless woman seeking consolation from a Sheela-na-gig. This collection is alive with horses, crows, deer, and as the title suggests, bees; all points north.

Enhanced by her apt and confident use of Scots, which glimmers like gold leaf throughout, Lynn Valentine’s poems weave the ethereal with the everyday, and reveal to us a glimpse of the natural and unnatural world we stride and stumble through. From council workers to prophetic aunts, Mills and Boon to the winter solstice, the poems here are full of making do and doing without, of childhood and childlessness, of the grief of loss and the grief of absence. This is a special collection, and a wonderful debut.

Lynn Valentine is a fearless writer who tackles the great unspeakables head-on – bereavement, loss, childlessness, exile; and yet it’s not death that prevails in these poems, but rather the sovereignty of life and, with all its gifts and with all its heartbreaks, the obstinate beauty of the living world. 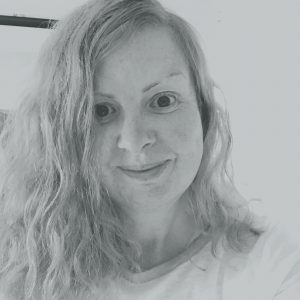 Lynn Valentine turned to writing after a prolonged period of poor mental health which led to her having to give up work. She lives on the Black Isle in the Scottish Highlands with her husband, their dogs and a mountain for a neighbour but her thoughts are never far away from her adopted city of Glasgow and her home town of Arbroath.

Lynn is a past winner of the Glasgow Women’s Library ‘Dragon’s Pen’ poetry competition. In 2019 she won a place on the Cinnamon Press Mentoring Scheme and in 2020 won the Cinnamon Press Literature Award leading to the publication of Life’s Stink & Honey, her debut collection.

Also in 2020, Lynn won the Hedgehog Poetry Press Dialect competition which resulted in the publication of her Scots language pamphlet A Glimmer o Stars.
In the same year she was one of five ‘North’ poets commissioned by the Scottish Poetry Library to write a poem for their Champions project.

Lynn’s poetry is primarily concerned with childlessness, family, her working class roots and the impact of poor mental health. She has been published widely. You can find out more on her website or follow Lynn on Twitter @dizzylynn