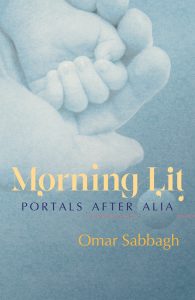 In a collection that is both full of wonder and deep philosophical reflection on what fatherhood means and how it shifts our perspective on all relationships, Omar Sabbagh once again raises the bar of what can be achieved in poetry. Here yearning, vulnerabilty, self-examination, our hopes and fears combine, in poetry that is honest, resonant and transformative. This is Sabbagh at the height of his powers as a magician of language and rhythm exploring the depths of what it means to be human and to love.

This attempt to describe emotional life in a concrete and bodily way resonates with so much of what Sabbagh does. Morning Lit then is a collection which is able to overlay observations of a newborn daughter’s bodily functions with elaborate imagery, and to ground emotional connectedness to a father in bodily images. As such, working through a range of formal approaches, this collection gives us a take on familial love which is, at once, one which every reader can share, and which also feels like a glorious one-off.

Listen to two poems from Morning Lit: Portals After Alia read at the online launch in April 2022:

Twenty Years In The Making

The following two pieces from Morning Lit appeared in The New England Review and are also recorded:

Letter to an Innocent in a Time of War

In his most personal collection yet, Omar Sabbagh brings a concentrated gaze to bear on turbulent emotions. Morning Lit is a deep and sustained exploration of fatherhood, marriage and bereavement: of love and its shadow side, which is loss. Crammed with symbolism, it is a work of maturity both emotional and poetic.

Omar Sabbagh offers his readers deeply contemplative—and even more deeply felt—windows into the both the seemingly relentless tensions and nearly transcendent joys of family life. Sabbagh masterfully demonstrates the full range of his poetic voice and craftsmanship, choosing most often to approach profound tribulation and self-interrogation within precisely contained rhymes and rhythms while bursting effusively into wholly charming exaltations in celebration of his daughter. Here, nothing is valued more than kindness, yet, with its abundant references to philosophy, psychology, history, and economic theory, Morning Lit: Portals After Alia reminds us that being present and open to the struggles and wonders of our own lives requires every resource of mind and heart we have.

Here is a paean to fatherhood in all its terrifying joy and vulnerability. It evokes the gratitude of the born-again parent, the wonder of being programmed ‘to love unconditionally’, of being compelled to ‘agree, and agree, and agree’, and of acknowledging that one’s love is now one’s ‘only, final fear’. Luminous, tender and gently delirious, Omar Sabbagh’s poems celebrate an awakening into a new sacredness.

Bursting with thoughtful and ebullient verse [that] spills-over with warmth and joy at the birth of a daughter, Alia. Omar Sabbagh adds his distinctive voice to the literature of fatherhood.

You can hear an interview with Omar by Dr Abir Ward here: 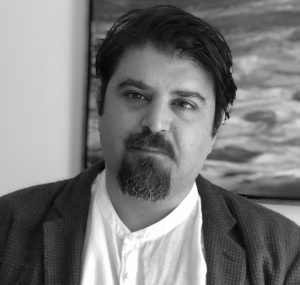 Dr. Omar Sabbagh is a widely published poet and critic. His work has appeared in, amongst others, Poetry Review, Poetry Wales, The London Magazine, Lighthouse, and Envoi. He has published several poetry collections with Cinnamon Press, including, But It Was an Important Failure and To the Middle of Love, as well as this debut fiction novella, Via Negativa — a parable of exile. He has published critical essays on a number of writers, including George Eliot, Lawrence Durrell, and Henry Miller. Omar has a PhD in English Literature from King’s College London and is presently an Associate Professor in English at the American University in Dubai.