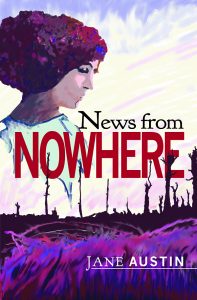 Inspired by letters from family members who served on the Western Front and written home to Bangor, News From Nowhere describes the impact of war on a family, including Bronwyn, the sister coming of age as her brothers and father endure the torments of the trenches and the battlefield.

Sometimes we get fed up in these shallow, narrow windings and run around on top, which isn’t too bad as this part of the line is comparatively free of corpses. I’ve learned to control my stomach, but will never overcome my horror of the stench. Dodging bombs is surprisingly easy, when you can see them coming. One of the sentries shouts, coming over Right, or Left, and we clear into dugouts. At first you see a heavy puff of smoke, then the bomb, which looks like a champagne bottle, turning over and over as it flies. 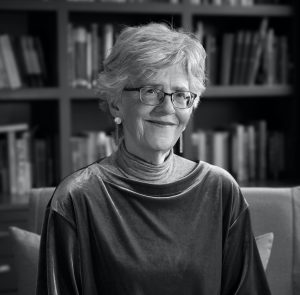 Jane Austin was born in Liverpool, has a degree in French and lives with her husband in London. She has worked in a number of settings, including schools, adult education and at the University of York.

News from Nowhere was Jane’s debut novel inspired by a collection of letters from three of her family as they served on the Western Front. Jane first read this remarkable collection in 1983, when her grandmother, Elizabeth Dewi Roberts, published them in a slim volume, entitled Witness These Letters. Written to the family in Bangor, North Wales, from 1915 to 1918, the letters vividly describe the torments of the trenches and the battlefield, and life as a prisoner-of-war.