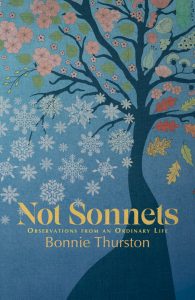 For years Bonnie Thurston has written short poems that focus on a single image or one revelatory idea. They were not sonnets, but were all fourteen lines long. The great sonneteers wrote sequences, often several on one topic, and in this Bonnie Thurston follows in their footsteps. The poems lead the reader on a gentle journey from home as they move through seasons in a sequence focussing on daily experiences that, in the words of Wordsworth, are ‘reflected in tranquility’. In these insightful, honed and precise poems you will discover the extraordinariness of the ordinary life and, mirabile dictu, wisdom. This is a collection to savour.

You can hear Bonnie reading here 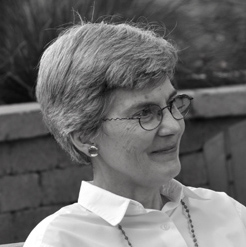 Bonnie Thurston resigned a Chair and Professorship in New Testament to live quietly in her home state of West Virginia. Author or editor of 23 theological books, she contributes to scholarly and popular periodicals. An internationally known Thomas Merton Scholar, her doctoral dissertation was one of the first on Merton. She began writing poetry as a child, published her first poems in college, and is now widely published and has won and placed in poetry competitions in the U.S.A. and U.K. Of her six collections of poetry the following are the most recent: Belonging to Borders (Liturgical Press, 2011); A Place to Pay Attention (Cinnamon Press, 2014) Practicing Silence: New and Selected Verses (Paraclete Press, 2014), and From Darkness to Eastering (Wild Goose Press, 2017). Her award-winning pamphlet, Forgotten Futures is also available to order. (Cinnamon Press, 2022). A lover of the West Virginia hills, Bonnie is a widow, an avid reader, gardener, cook, and a classical music lover.