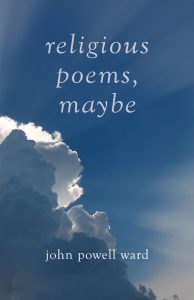 Religious poetry that is not only approachable but makes space for secular readers is rare, perhaps because it requires such fine sensibilities and delicate touch. But with ten previous collections behind him, including The Clearing (Poetry Wales Press, 1984), winner of the Welsh Arts Council Poetry Prize for 1985, and his Selected and New Poems (Seren, 2004), as well as the elegant and poignant, Instead of Goodbye (Cinnamon Press, 2017), John Powell Ward is the poet to accomplish this.

Bulletin of the Welsh Academy

Combines an uncompromising integrity with a contemporary flair for understatement… one is left with the impression of having been told the truth cleanly and with warmth.

Mournful, strong, cold, and very sad, in the manner of Eliot and Proust.

Selector and presenter of the BBC Radio 3 programme Poetry Now from 1977 to 1984, and editor of Poetry Wales between 1975 and 1980, John Powell Ward is not only widely published, with major festival appearances and critical acclaim, but continues to write with authenticity and elegance that is as unassuming as it is pitch-perfect. The word, language itself, is critical in Ward’s writing and never more so than in this finely tuned, reflective and considered collection. Religious Poems, maybe is John’s third collection with Cinnamon Press, coming after the poignant and delicate instead of goodbye.