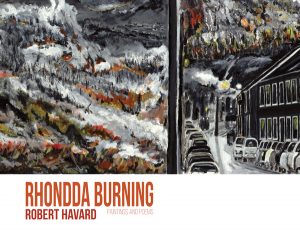 In Rhondda Burning paintings and poems mirror one another, reflecting on life in the eponymous valley or in the area around Cardigan Bay, with its wide horizons. Havard looks at his native environments with the eyes of both one who belongs and a wanderer whose long association with Spain impressed on him the kinship between the sister arts and the benefits that come when poets and painters breathe the same air.

Growing up in a steep-sided valley set Havard’s visual DNA. Ten miles daily to school and ten back, upstairs in a double-decker bus with outcrops of rock and slag flashing by, left its mark. Watching his father at a window, craning his neck to scour the mountain for a break in the spillaging mist… These images were processed slowly and this depth of observation shines through both image and text.

Elegant, deft and vital, this collection is an embodiment of people, places and communities that invite us to listen and see. 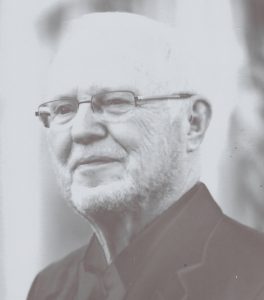 Robert Havard has developed a keen relationship between image and poetry over a lifetime of study, teaching and practice. He taught at several universities—Cardiff, Los Angeles and Auckland among them—before settling in Aberystwyth.

His first collection came out in his fifties: Look up without Laughing (Gomer, 1998).

As Spanish professor he focused on Lorca’s generation of poets, several of whom also painted. He learnt from these masters that for both painting and poetry it is the image that focusses the work’s power and meaning. He explored this in The Spanish Eye: Painters and Poets of Spain (Tamesis, 2007) and it is their interaction that sparks Rhondda Burning.