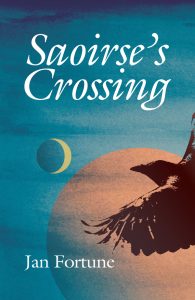 Saoirse grows up hearing the extraordinary stories of family members who died before her birth or in early childhood. Her aunt Miriam, who believed she had lived across a thousand years to be with her lover in each generation, the Moorish Princess Casilda. Her grandmother, Daireann. more than a healer and wise woman, and her father, Oisín, an alchemist and magician. But who is Saoirse?

I was Casilda’s mother more than a thousand years ago, she tells her mother, Sarah.

Tucked away under a mountain in Roscommon in Oisín’s family home, Saoirse meets Faolán, a local boy lost in their garden maze. As they play out stories from myth, Faolán’s loyalty and love grows, but Saoirse craves adventure and is not easily won.

As their paths diverge, one momentous event threatens everything, leading Saoirse into a maze from which she might never emerge and taking Faolán on a quest on which their lives depend.

Spanning back into the mists of pre-history; travelling from Roscommon to Paris, Prague to Brittany, Budapest to Nice, Zaragoza to Tromsø, and bringing together Celtic mythology from Ireland and Brittany, Saoirse’s Crossing asks questions of identity as contemporary as they are ancient, exploring the lengths we will go to for love.

Her previous publications include non-fiction titles in alternative education and parenting and the major book book for writers: Writing Down Deep: an alchemy of the writing life (available as both hardback and paperback editions) ; the novels Dear Ceridwen and Coming Home. Her previous poetry collections include Particles of Life (BlueChrome), Slate Voices (a collaborative collection with Mavis Gulliver), Stale Bread & Miracles, Edge (a companion to Adam Craig’s Year W), and Turn/Return, a pamphlet inspired by Brian Eno’s Oblique Strategies cards. Her most recent work is the Casilda Trilogy of novels, This is the End of the Story, A Remedy for All Things and For Hope Is Always Born, and Saoirse’s Crossing is the spin-off, stand-alone novel from this sequence.