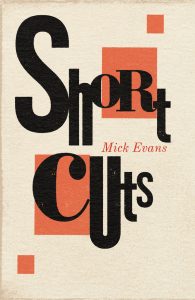 When accomplished poet, Mick Evans, turns his attention to prose, we might know that what we will be reading will be surprising, original and brimming with humanity. Short Cuts might have been written with a dagger masquerading as a pen or pen wrestling with its dagger within. The result is intense, immersive and lyrical. These extraordinary pieces explore a landscape of extreme emotion that might, at first sight, appear to come from a chaotic imagination, but which soon reveal an acute intelligence and quick wit at work across the range of human feeling.

The granular attention to human flaws and quirks, observed with as much compassion as honesty, and written with such inventiveness and style makes Short Cuts a compelling and unmissable collection. 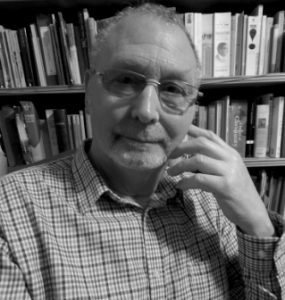 Mick Evans grew up in rural Hertfordshire. He read English at Oxford, where he gained a Violet Vaughan Morgan Prize. He pursued a career in teaching in Kent, Cheshire, and finally Carmarthenshire. The move to Wales was prompted by the desire to re-establish the family’s Welsh roots. Surrounded by landscapes steeped in myth and the dramatic scenery of the Black Mountains and Towy Valley, the tensions of urban and natural worlds are a constant source of inspiration.

A founder member of the Dinefwr Poets group, he is published in a number of anthologies, a runner up in the Cinnamon single poem competition, and winner of the Welsh Poetry Competition. His debut pamphlet, Burlesque, was published in 2019, and his first collection, Light Airs, in 2021(both by Cinnamon Press).