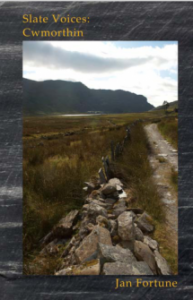 Slate Voices: Cwmorthin & Islands of Netherlorn is a collection in two voices exploring change in two extraordinary locations. Observing the metamorphosis of both land and culture, this dual collection builds into a powerful psycho-geography of place and people in relation to the poets sifting through ruins and remnants. Once thriving industrial centres, characterized by harsh lives, premature death, and loss, Cwmorthin and the Islands of Netherlorn also thrummed with strong traditions, flourishing cultures and local language. Today Cwmorthin in North Wales and the Islands of Netherlorn off the coast of Scotland are rural havens. The slate remains; stacked in stark and remote peace around the lake at Cwmorthin, littered amongst tiny, far-flung communities in the islands. The harsh life has gone; Cwmorthin in no longer ‘the slaughterhouse’ where twelve year olds worked by candle-light; Belnahua is no longer the unforgiving home without the ‘luxury’ of fresh water and the constant pounding din of the pumps. But so much else has gone too: incomes, culture, tradition. 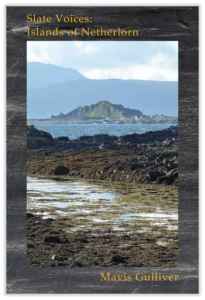 In these locations of startling contrasts two poets sift through the wreckage and the paper trail to find echoes of life and death that is transformed into a series of formally inventive poetry sequences. Using prose poetry, lyrical glossaries, found material, the patterns of nursery rhymes and the rhythms of liturgies, Slate Voices resonates with compelling narratives and a visceral sense of place in poetry that is fresh and precise, enhanced by black and white photographs that chart the changes. 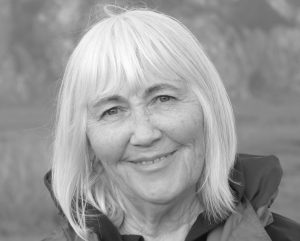 After a career as a teacher and botanist, Mavis Gulliver lived on the Isle of Islay for many years,  travelling extensively throughout the Hebrides, before moving to Shorpshire. A regular contributor of illustrated articles for Scottish Islands Explorer magazine, her poetry has appeared in many magazines and anthologiess. In addition to Slate Voices, her solo collection, From One Island to Another was published by Cinnamon Press in 2015.

Her previous publications include non-fiction titles in alternative education and parenting and the major book book for writers: Writing Down Deep: an alchemy of the writing life (available as both hardback and paperback editions) ; the novels Dear Ceridwen and Coming Home. Her previous poetry collections include Particles of Life (BlueChrome),  Stale Bread & Miracles, Edge (a companion to Adam Craig’s Year W), and Turn/Return, a pamphlet inspired by Brian Eno’s Oblique Strategies cards. Her most recent work is the Casilda Trilogy of novels, This is the End of the Story, A Remedy for All Things and For Hope Is Always Born, and the spin-off, stand-alone novel Saoirse’s Crossing.