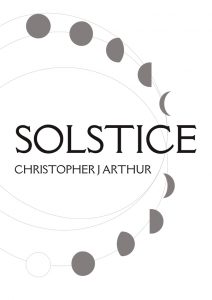 Ranging widely in substance and style Solstice moves from lyrical invocations of Nature to reactions to “lockdown”; from a classical sonnet to the free-wheeling title poem. Across this short collection, the musicality of Arthur’s register is enlivened with wit, including a couple of outrageous puns. Often culminating in wonderful surprises, the poems include a deeply felt meditation on Edward Hopper’s art, and a powerful prophecy of ecological disaster. This is a collection to savour and revisit.

Arthur’s work is moving and expertly written. His is a distinctive voice. 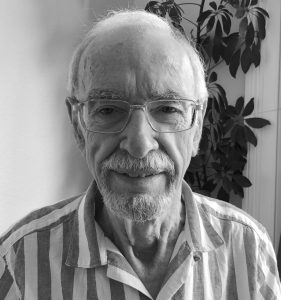 Born in 1940, Christopher J. Arthur studied at the Universities of Nottingham (1959-63) and Oxford (1963-65). He then gained a post at the newly-formed University of Sussex, teaching philosophy in the School of Social Sciences for many years. He took up poetry only after his retirement from teaching. He continues to live in Brighton with his partner, Morag.

In his student days Chris Arthur was active in the Campaign for Nuclear Disarmament. Later he was a founding member of the Radical Philosophy Group, and he served as an editor of its journal Radical Philosophy. Also, for some time he was on the jury awarding the Deutscher Memorial Prize annually, for books in or about the Marxist tradition.

He has published many scholarly papers, and he authored three books: Dialectics of Labour (Basil Blackwell 1986), The New Dialectic and Marx’s ‘Capital’ (Brill 2002), and The Spectre of Capital (Brill 2022).