Footfalls in the Silence 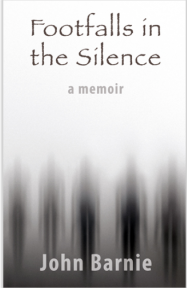 John Barnie wrote of his Abergavenny childhood in the portrait of his father and his world, Tales of the Shopocracy. An altogether different style of memoir, Footfalls in Silence deals with his life up until 1969 when he moved to Denmark to teach. Different, both in form and purpose, it delineates the development of the critic and poet’s inner life, revealing how he became a writer and poet, or at least, as Barnie says, ‘how I became the poet that I am.’ Written with John Barnie’s characteristic unsentimental lyricism and sharp visual and linguistic acuity, the book is eminently readable and allows the reader to consider what it might mean to be human whilst immersed in a particular human and humane story that is compelling and reflective without any trace of egotism. This is a long awaited book that will be welcomed by John Barnie’s broad readership and find new readers.