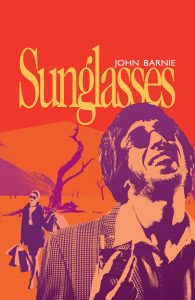 Another outstanding collection from John Barnie, Sunglasses distils the work of a distinctive and accessible voice. The language is precise and accessible, yet each poem always says more than appears on first reading. Rooted in landscape and character, Barnie’s poetry shines an uncomfortable light onto issues of ecological degradation, mass extinction and mortality, yet remains lyrical and wry. He shakes a fist at the aging process, at the disappearance of species and at the insanities of modern politics and consumerist society, yet there is no note of bitterness. Acerbic? Sometimes. Cold? Never.

Barnie’s poetry is girt with apprehension of time, including how it makes war on his body yet sharpens his mind. … His readers, a modest band of bluesologists, poetry freaks and beachcombers, are brought together on the edge of time’s abyss and encouraged to look down. To each of us, Barnie’s poems deliver a sly nudge. … Barnie for me is what R.S. Thomas was for earlier critics in the 1980s. I find his preoccupation with time far more attractive and yes, humane, than the older poet’s god-bothering. And crucially, Barnie’s ability to coin memorable images has grown in recent years, commensurate with his ability to pare his poetry to the essence. … Serious? Hugely. Ironic? Perhaps less than a practiced reader might expect. Yet his writing is packed with bittersweet humour. (Or is that where his real ironic gift lies?).