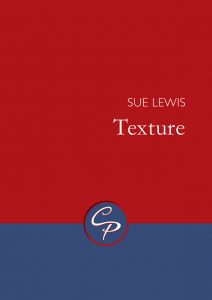 Texture is remarkable for the way its apparently casual free verse allows powerful images and themes to spill over themselves across its line endings in its rueful and headlong confessions and reflections. Its directness is exhilarating.

While the prey-birds circle,
drench my pyre with
precious oils and

let me
blaze once more. 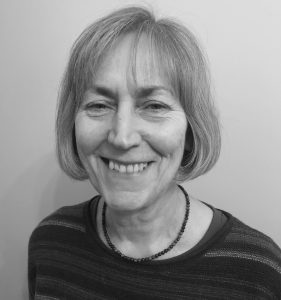 Sue Lewis is a South London poet who began to write as a way of reclaiming her confidence after a minor stroke. Her poetry speaks with empathy and insight about how things are; the texture of our lives.

She has been published in The Fenland Reed, Blithe Spirit, Morley Magazine, Southbank Poetry and Lunch. Her work featured in the pandemic anthology Beyond the Storm which raised money for NHS charities. She was shortlisted in the Morley Arts Festival poetry competition in 2018 and has won the Cinnamon Press Pamphlet Award twice: with Texture in 2019 and again with Journey in 2021.

She reads regularly with Croydon’s Poets Anonymous and Clapham’s Original Poets and is a member of the British Haiku Society, the Poetry Society, the Second Light network and the Kith writing community.

Sue has an MA in Creative Writing from the Open University, for which she was awarded a Distinction. She practises tai chi and qigong and is learning (somewhat belatedly) to play the recorder. After looking after retired greyhounds for many years she has now gone over to the dark side and adopted a very annoying cat.