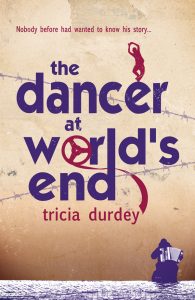 The long-awaited sequel to The Green Table

Willoughby’s new landlady at Gladstone Terrace is not what he expects. The flamboyant Ruby Hoffman wears a green beret on which she’s pinned a velvet bird by its feet, explaining that she busks with her cousin, Gregor — Ruby playing accordion while Gregor dances. Ruby and Gregor, born nine years and one country apart, are bound to each other by a family weighed down with sacrifice in the Dutch resistance on one side and Nazi collusion on the other. While Ruby’s colourful persona hides a brittle fragility, Gregor’s burden of guilt is channelled into caring for others, feeding their strange group of tenants, each barely clinging to the edges of society. But when the enigmatic Leda Godwin turns up, wanting to know Gregor’s story, the delicate balance of their lives is shaken.

Peopled with intriguing and memorable characters and told with exquisite precision, The Dancer at World’s End explores the legacy of violence, whether perpetrated by those committing genocide or those opposing them and how the stories handed down to us of who we are or should be, who we should love or hate, go on shaping lives across generations.

An extraordinary sequel to the powerful events recounted in The Green Table, this is a courageous, heart-rending and important story. Set in mid-seventies London, the story goes back to Nazi Germany, as replete with pomp and ambition as it is with horror, and to post-War Netherlands, building a complex tale of identity, survival and grace. 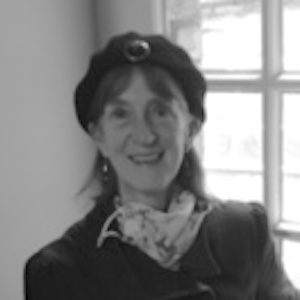 Tricia Durdey grew up in Chester and trained as a dancer and choreographer in London and Amsterdam, where she was involved with the experimental dance scene in 1970s, and drew a lifetime of inspiration from working with the forerunners of New Dance.

As well as dancing, she has always written, and her interest in the partnership between words and movement has led to making many text-based performances. She began writing fiction during a hiatus in her dance career and has been published by Chester University Press, Myslexia, Cinnamon Press, Shoestring Press and the Radio 3 website for The Verb.

During her year dancing in Amsterdam she lived in a Dutch merchant’s house opposite Anne Frank’s secret annexe. The memory of this, and her preoccupation with the history of WW2 and its legacy, led her to write The Green Table, published in 2015, and The Dancer at World’s End, 2021. In these novels she aspires to get into the skin of both the collaborators and the heroes of Nazi occupation.

Upside Down in a Hoop, a memoir about her parents, her childhood in dance, and selling the family house of 60 years in Chester, will be published by Cinnamon Press in 2022 is her most recent publication.

Tricia writes in a room in Haarlem Mill Arts Space in Wirksworth, Derbyshire, with two other writers, many visual artists and several dogs. As a challenge ,she is learning aerial skills and hoop at Tuyo Circus Arts in Nottingham, and studying the German language with Duolingo.