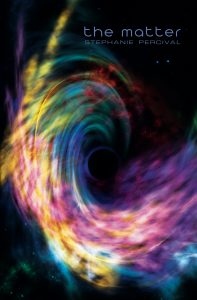 Eleven year old Simeon Isherwood is locked in — he can neither walk nor talk.

A radical new gene therapy gives him contact with the world for the first time. Simeon, used to the tranquility of his inner world, finds only agony. This turmoil of new sensations and experiences catches the attention of a mysterious entity. God-like and aloof from humanity, it decides it must heal this young mind.

The results are catastrophic, but not in a way that anyone would anticipate. From the author of The Kim’s Game, The Matter is a unique and head-spinning speculation conceived around convinding characters. 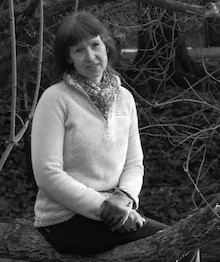 Stephanie Percival always intended to write a novel, but it wasn’t until 2004 when she was shortlisted for the BBC End of Story competition, that she believed it might be possible. That was the motivation to develop, The Memory of Wood, and self-publish it in 2011.

The Kim’s Game, which was long-listed in the Cinnamon Press Debut Novel Competition, was published in October 2017, followed by The Matter.

Stephanie is a member of the Creative Writers @ Museum, in Northampton. They meet regularly and use the exhibits as stimulation for their work, producing portfolios to accompany the exhibitions.

She works as a podiatrist, part-time for her local NHS service. She lives in Northamptonshire with her husband, Adrian, and has three children, Nick, Alistair and Katie.