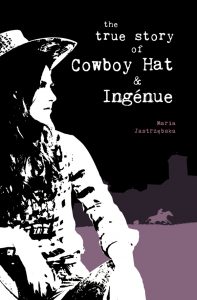 In a landscape scarred by conflict, two women begin a quest for a lost child and a lost world of peace. Bound together by love and acceptance, their story and path interweave with fellow outcasts — people like the ever-suave Dame Blanche, Sister Asunta, martial artist and magician, Master Wu Wu, and the lost soul, Tulip — but whether peace is simply the end of war or something deeper is something they must discover for themselves.

A haunting tale, told in a series of visionary prose poems, The True Story of Cowboy Hat & Ingénue interweaves memory and yearning to ask questions that reflect on our past and, disturbingly, on our futures.

Maria Jastrzębska’s The True Story of Cowboy Hat and Ingénue, (Liquorice Fish 2018) an absorbing sequence of prose poems following two women’s journey across the war-torn landscape in searchable rural utopia in the mould of Ed Dorn’s Gunslinger is utterly distinctive and different. The sequence dissolves conventional boundaries of time narrative in order to produce a hyper-reality of interconnected stories within a love story and an expanded range of otherness, in terms of identity, voice and languages. Cowboy Hat and Ingénue meet Dame Blanche, a giant black man, who runs the El Dorado bar, and Mercedes the brothel keeper and a host of other outcasts and victims of oppression. The range of voices and languages, the various narratives all succinctly described, are all impressive and produce an exhilarating read.

And you can hear Maria being interviewed about her work here 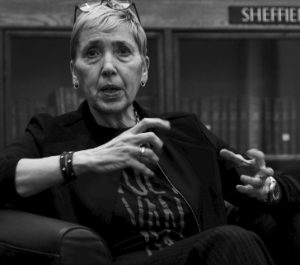 Maria Jastrzębska is a Polish-born poet, editor and translator. Her most recent collection was At The Library of Memories (Waterloo Press 2013) and her selected poems, The Cedars of Walpole Park, have been translated into Polish by Anna Błasiak, Paweł Gawroński and Wioletta Grzegorzewska and published bilingually (Stowarzyszenie ŻŻwych Poetów 2015). Old Knives is a selection of her work translated into Romanian by Lidia Vianu and published bilingually by Integral Contemporary Literature Press (2017). She was co-editor with Anthony Luvera of Queer in Brighton (New Writing South 2014). She co-translated Iztok Osojnik’s selected poems Elsewhere with Ana Jelnikar and her translations of Justyna Bargielska’s selected poems The Great Plan B are published by Smokestack Press (2017). Her work features in the British Library poetry and translation project Poetry Between Two Worlds. Dementia Diaries, her literary drama, toured nationally with Lewes Live Lit in 2011. Her poems have been much anthologized from The Virago Book of Wicked Verse (1992) to This Line Is Not For Turning — An Anthology of Contemporary British Prose Poetry (Cinnamon Press 2011) and Hallelujah for 50ft Women (Bloodaxe 2015). Maria lives in Brighton and you can discover more about her work on her website.