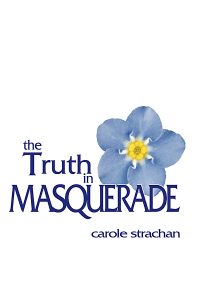 An unusual story of love, loss and the possibility of second chances, The Truth in Masquerade follows Anna Maxwell, struggling to understand the abrupt and unexpected ending of her marriage. Haunted by memories of her husband, Edwyn, and of another man who once loved her, she returns to Oxford to sing the role of the Governess in Benjamin Britten’s spine-chilling opera, The Turn of the Screw. Caught up in a world of secrets and uncertainties, Anna has to confront the reasons her marriage unravelled, questioning what was true or illusory, and facing the challenge of a demanding dramatic role; a part that has increasingly painful emotional resonances with her own life. Meanwhile, Edwyn, too, is haunted, by ghosts from his past, and a mystery of identity is revealed that Anna must resolve for both of them, if either is to move on with life.

Carole Strachan grew up in Merthyr Tydfil in South Wales, and now lives on the coast near Cardiff. She’s spent most of her career working in theatre and music and for ten years was responsible for marketing at Welsh National Opera. From 2008 – 2020 she was Executive Director of the leading contemporary opera company, Music Theatre Wales. Carole’s second novel with Cinnamon Press is A Song of Thyme and Willow and currently writing her third novel which is forthcoming with Cinnamon.