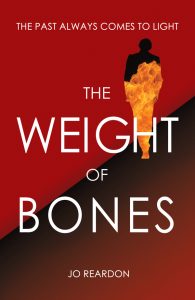 Frank Molinari faked his own death in a fire at the fairground he owned with his brother. Now he’s back, in debt, and looking to be bailed out, but as fatal events spin out of control, the past and present weave with mounting tension. For DI Tom Fairfax, whose daughter, Susie, died in the original fire, ghosts and guilt return, while Susie’s friend Leah, a local journalist consumed with blame, sees the mystery as an opportunity to escape the small Northern seaside town at last.

Complicated by old grievances, dead ends, suspicion and hidden identities, The Weight of Bones is an exploration of the difficulty of finding either closure or justice in a world of intrigue and messy lives.

What does Dolores, Frank’s lover, who was with Tom when Susie died, really know and what will it cost her? Why does Leah want Frank’s brother, Genaro, to be found guilty? How does Leah’s flatmate, the Rumanian, Mati, fit into the story and what is his connection to the mysterious Eva, and hers to Frank? And why does the arrival of the arrogant Chief Inspector Robert Nardone only add to the confusion, forcing Tom to finally turn to Leah for help?

As a story of a POW interment camp on Orkney and an old love triangle begin surface, another story of jealousy and greed accompany it, leading back to the fair ground and to the explosive finale.

A tangled and beautifully textured tale of murder, fires, deceit, blame and guilt. Densely written, with distinctive characters and a mystery that hooks from the opening line to an ending that refuses to be neat, The Weight of Bones is a thrilling debut. 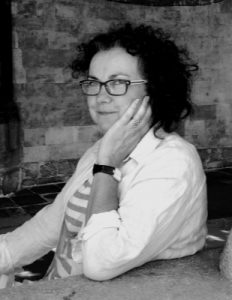 Jo Reardon is a writer of fiction, poetry and drama. Her short stories and poetry have been published alongside the work of contemporary artists at the Corinium Museum in Cirencester, Warrington Art Gallery and Burgh House Museum in Hampstead and her plays have been produced on BBC Radio 4. Her first novel, The Weight of Bones, was shortlisted for the Cinnamon Press Debut Novel Award. She is a Lecturer for the Open University and lives in the North West of England on the Sefton coast.