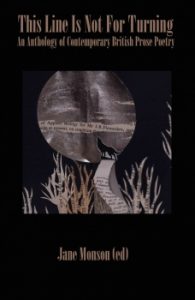 This Line is Not for Turning –Jane Monson (ed)

This anthology of contemporary British prose poetry is the first of its kind in the UK. It celebrates prose poetry being written by writers such as George Szirtes, Pascale Petit, Carrie Etter, Luke Kennard, Andy Brown, Anthony Rudolf and Richard Gwyn, Linda Black and Kate North as well as new voices. The editor has chosen prose poems that have a distinctly unfussy but refreshingly original way of using the form. Closer to short prose in their economical use of storytelling, but expertly using sounds, tones, twists and rhythms of poetry, these pieces exemplify the craftwork involved in the form.

Homing in on the narrative side of prose poetry, these quirky texts infuse unexpected scenarios with a mild surrealism and a sense of understatement and restraint.

This necessary and groundbreaking anthology is well overdue and will answer some questions poets are considering today about prose poetry, and raise many new ones.

These prose poems are compelling in their elegance, their swift and subtle movements, their embodiment of serious play. In this “borderline” form, life’s accepted compartments are thrillingly broken down. Jane Monson has assembled an anthology that is both necessary and imaginatively liberating. 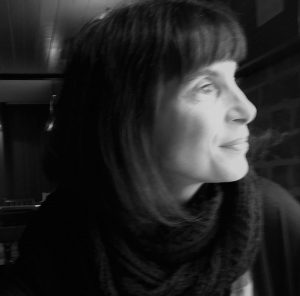 Jane Monson lives in Cambridge as a poet, independent researcher and Specialist Mentor for disabled students at the University of Cambridge. Previously she was an Associate Lecturer in Creative Writing at Anglia Ruskin University. Her PhD is on the prose poetry of Francis Ponge and she has an MA in Creative Writing (poetry) from UEA. An addition to This Line is not for Turning (2011), the anthology of contemporary British prose poetry which Pascale Petit praised as ‘ground-breaking’, she has more recently edited British Prose Poetry: The Poems without Lines (Palgrave Macmillan, 2018). She is widely anthologised in the UK and her prose poetry and reviews have been featured UK-wide and internationally in Westerly, Fortnightly Review, Envoi, Aesthetica, Magma and Poetry London. Jane’s collections with Cinnamon include Speaking Without Tongues (2010) and The Shared Surface (2013). Cassandra Atherton, award-winning Australian prose poet and international expert and critic of the form has referred to Jane as ‘the fairy godmother of prose poetry.’

‘One Foot; Many Places: The Prose Poem’s Art of Standing Still While Travelling,’ Prose Poetry in Theory and Practice, eds. Paul Hardwick and Anne Caldwell (forthcoming with Routledge).

‘Square of Light: The Artist is Present’, in The Valley Press Anthology of Prose Poetry, eds., Anne Caldwell and Oz Hardwick (Calder Press, 2019).

‘Via Negativa’, in The Penguin Book of the Prose Poem: From Baudelaire to Anne Carson, ed., Jeremy Noel-Tod (Penguin, 2018).