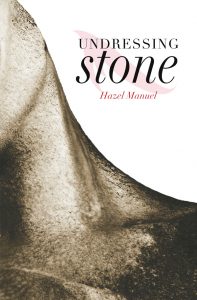 “If you were able, how would you redesign your life?”

Sian Evans is a feisty yet emotionally aloof divorcee with a secret. When her shrink asks her this question she takes it seriously. Giving up her stable home and job in Wales, Sian travels alone to a forgotten corner of rural France to begin a new life in a borrowed cottage.

Undressing Stone is a mysterious tale which flirts with the gothic as it interweaves Sian’s conversations with her psychiatrist, with her newly reclusive life in France. There she meets an enigmatic sculptor with a penchant for working in the nude. Will their odd encounters encourage Sian to admit a truth she has avoided for years? And what are the consequences if she does?

In a narrative that moves between caustic observation and the richly sensual, this is a novel that challenges many of our taken-for-granted assumptions about modern-day life, and that celebrates the unconventional.

From the author of The Geranium Woman and Kanyakumari.

A highly readable multi-layered story tracing the life of a complex woman in search of new beginnings; Undressing Stone is written with insight and passion by award winning writer Hazel Manuel.

Following the realization that she feels trapped in her life – partly caused by working in the confinement of a job she detests and with her marriage ended and her son having flown the nest to travel the world, Sian Evans is determined to turn a page on her old life and leaves Cardiff, Wales, for her Aunt and Uncle’s remote cottage in the wilds of rural France. In fact it is only a relatively short drive from the airport and nearest town, but such is life in a hamlet in the West of France – there is but one bus a week and a bread van that delivers patisserie and du pain to the residents – also once a week – it feels very remote. Combine that with Sian having thrown her mobile phone into the sea and the fact that she has no computer and no car she becomes locked into a different sort of seemingly closed environment.

Undressing Stone is a character driven story written with panache, insight and wit. Sian’s encounters early in the story with for example the Occupational Therapist – he of the Disney socks brigade – are extremely funny and many of the characters she builds relationships with later in France are rounded and true with some of them very familiar as character types, yet not at all in a cliched way. I think for example that we have all met a Mme Volt brusque to the point of rudeness and seemingly judgemental, she softens a bit towards our heroine as Sian earns herself a place in the locale proving to be a very useful member of the local community.

Hazel Manuel has written a strong novel revealing the well delineated character of a woman who is aware not only of the ironies and coincidences in life and of complexities of relationships, but one who is up for a challenge and all of this despite the fact that she is psychologically traumatized when she first arrives in France.

To my mind Undressing Stone is a well paced novel and a page turner with not a little hint of the Gothic containing a strong suspenseful air to our protagonist’s story. There are some disturbing and visceral scenes in the novel especially the one with Creepy Roger. Overall though this is a story very much about coming to terms with life’s cruelties and absurdities. It speeds along with many of the events in Sian’s life, past and present, hauntingly told. There are also some evocative descriptions of nature’s flora and fauna including relationships with cats and a rather unusual and somewhat ghostly house guest.

Such is the brilliance of the writing and ambiguity of some of the scenes and settings, we are not always one hundred per cent sure what is real and what is not and this lends itself well to the overall tension of the novel.

We leave Sian on a somewhat ambiguous yet hopeful note. Through her experiences and encounters, the layers of her angst – what the author calls softness are peeled away – and Sian is by the conclusion of the novel in the process of being whole again… The figure within the marble is exposed or is certainly beginning to be so. Sian is ultimately led to a realization (hinted at by the by the central metaphor and title of the novel), that life and its experiences can be very challenging but also liberating.

I really enjoyed this book…did not want it to end and I have no hesitation in recommending it. I actually think that it has the elements within it for a good television drama. 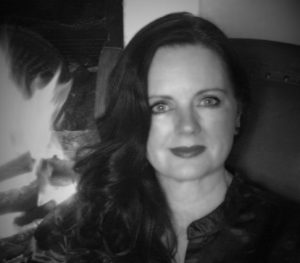 Hazel Manuel is a UK born novelist whose writing follows a career in education, first as a teacher/lecturer and then as a business leader within the education sector. Having married a French man she met in India, Hazel now lives and writes in France, divining her time between Paris and the Loire.

Hazel’s route into writing was an unusual one, which draws not only on her experience as a teacher of Philosophy, Sociology and Psychology, but also on her time as CEO and MD of two successful education companies. Her history is one which brings to her writing an unusual breadth and richness. Having moved from the corporate world into full-time writing, Hazel is able to explore and express those deeper aspects of what it means to be living and striving in our modern world. Through themes of uncertainty, loss, obsession, power, change and fear, and of questioning life and the self, the reader travels with her characters through an archetypical inner journey that is fundamentally satisfying because it could equally be their own. ‘It is important to me to explore the issues and questions that modern life raises,’ Hazel says. ‘Questions of identity, equality, the ideas and assumptions that inform the ways we live our lives underpin my stories and the characters that live them.’

Since becoming a full-time writer, Hazel’s books have received international attention. She has given talks and taken part in literary panel discussions, including at the Goa Arts and Literary Festival in India, the London Welsh Literature Festival and Zestfest UK. She has given interviews about her work on BBC Radio Wales, World Radio Paris and Expat-Radio France, and has delivered workshops and author talks at writing retreats, festivals and bookshops in France, the UK and in India. Hazel has been Writer in Residence for Your Writeful Place in France and the UK and at the Sivananda Ashram in Southern India where she was commissioned to write a book about Ashram life.

In addition to writing, Hazel runs literary salons and events in Paris and London as well as writers retreats at her farmhouse in the French Loire Valley. You can find out more about Hazel and her work at www.hazelmanuel.net.