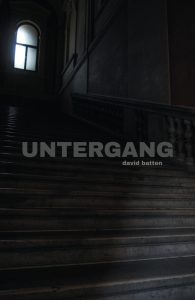 Exploring how humanity is rooted in and linked to everywhere and everything, David Batten brought a fresh voice and precise language to his reflective, but ultimately hopeful debut, Transhumance. In Untergang, he moves from the open, cosmic, affirming tone to a sequence that is internally reflective — darker, almost claustrophobic. Whereas his first collection ended on the plateau, in the light, anticipating summer, Untergang starts indoors in the dark of a power cut in the depth of winter and finishes inside the writer’s ribcage, where it is even darker. This is not a world without hope, but it is one that urgently needs to wake, to face the dark and change it.

Increasingly confident, Batten uses his distinctive, lyrical voice as a call to reflect on what might really matter in life.

Only we remain obliged
to carry on. Otherwise exodus
by a southern corridor, the quiet
flight from night’s great pincer movement. 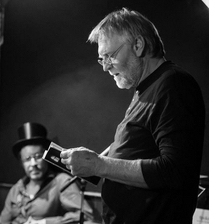 David Batten studied history and ideology at Hull College and Hull University, where he took his Master’s degree, and also played back row for Hull & East Riding RFC, before rejoining family in Gwynedd, teaching at Coleg Meirion Dwyfor, then working in community development in North Wales. His debut collection Transhumance was published in 2016; and a pamphlet, Storme Passage in 2017; followed by the full length collections Untergang in 2018, and Winterreis in 2021. Rotterdam was his first prose work and is part autobiography, part philosophical reflection. David lives in the Aveyron in southern France.