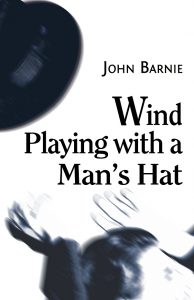 Deeply perceptive, always dipping below the surface of things, Wind Playing with a Man’s Hat combines a plaintive honesty about change, mortality and darkness with a precise and lyrical vision that also sees the light. Never sentimental, there is a keenness of wit that penetrates to the heart of things, the poems uncurling in single sentences that reverberate with gentle, but profound moments of epiphany:

as if grain should cascade
forever in a golden trail
and all they had to do was
follow to the rainbow’s end.

Barnie’s poetry is hard to dislike, its pace, its riff being easy on the eye and ear, but he doesn’t pander to the heart.

A Year of Flowers:

It is rare that I read a poetry volume at one sitting. But I did so with this one. Indeed, in its delicacy and wit, and in Barnie’s deeply appealing pleasure in his book’s subject-matter — something that radiates from it throughout — I am left wondering if A Year of Flowers might just be the best piece of work that he has given us so far.

John Barnie is a poet and essayist from Abergavenny, Gwent. John lived in Denmark from 1969-1982 and was the editor of Planet, The Welsh Internationalist from 1990-2006. He has published several collections of poems, mixed poems and fiction, and two collections of essays, one of which, The King of Ashes, won a Welsh Arts Council Prize for Literature in 1990. His collection Trouble in Heaven (Gomer, 2007) was on the Wales Book of the Year 2008 Long List. Cinnamon Press has published several previous collections:The Forest Under the Sea, The Roaring Boys, Departure Lounge, and Sunglasses as well as his latest collection, A Report to Alpha Centauri. Cinnamon also published the memoir, Footfalls in the Silence and an anthology of poetry and prose in honour of John Barnie, Wired to the Dynamo, edited by Matt Jarvis.