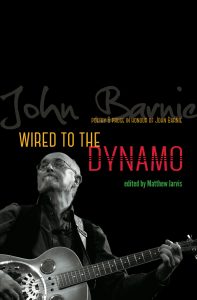 Wired to the Dynamo offers poetry and prose in response to the work and career of John Barnie, one of Wales’s most important contemporary writers: ‘freethinker, editor, poet, guitarist, essayist, and author of some of the best memoirs I’ve read’ (Peter Finch, from his own contribution to this volume).

Collecting analysis, recollection and creative reflections on Barnie’s ongoing literary output, Wired to the Dynamo‘s line-up—from Gwyneth Lewis and Samantha Wynne-Rhydderch to Peter Lord and Robert Minhinnick—is testament to the esteem in which Barnie’s work is held.

MJ: […] How important to you is this sense of singing irrespective of our own, human temporariness?

JB: Well, faced with a material universe of which you are an infinitesimally small part, you might as well “sing” as not. Singing in the knowledge of mortality is a form of stoicism which poets have always understood ą look at Y Gododdin, look at Beowulf. I like the Swedish poet Harry Martinson’s definition of poetry as the ‘soul’s play with the soul of language’, taking ‘soul’ metaphorically, of course. If a poem does not have this sense of play — if it does not sing — it is just words on the page.

from the chapter ‘A kind of celebration’: John Barnie Interviewed by Matthew Jarvis 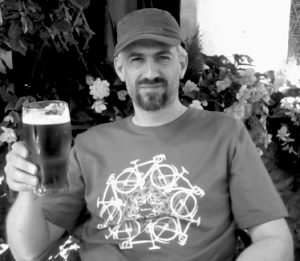 Professor Matthew Jarvis has written two monographs on the English-language poetry of Wales — Welsh Environments in Contemporary Poetry (2008) and Ruth Bidgood (2012), both published by the University of Wales Press — as well as numerous essays and reviews. He has co-edited special issues of the journals Green Letters and the International Journal of Welsh Writing in English, and is currently co-editor of the International Journal of Welsh Writing in English. His debut poetry pamphlet, The Mallarmé Poems, was published by Cinnamon. He is Chair of the Poetry Wales Committee and co-Chair of the Association for Welsh Writing in English. He has recently edited a volume of essays, Devolutionary Readings: English-Language Poetry and Contemporary Wales, which is to be published by Peter Lang in 2017. He is the Anthony Dyson Fellow in Poetry at the University of Wales Trinity Saint David.

John Barnie is a poet and essayist from Abergavenny, Gwent. John lived in Denmark from 1969-1982 and was the editor of Planet, The Welsh Internationalist from 1990-2006. He has published several collections of poems, mixed poems and fiction, and two collections of essays, one of which, The King of Ashes, won a Welsh Arts Council Prize for Literature in 1990. His collection Trouble in Heaven (Gomer, 2007) was on the Wales Book of the Year 2008 Long List. Cinnamon Press has published several previous collections:The Forest Under the Sea, The Roaring Boys, Wind Playing with a Man’s Hat, Departure Lounge, and Sunglasses as well as his latest collections, the richly illustrated Afterlives and A Report to Alpha Centauri. Cinnamon also published the memoir, Footfalls in the Silence.