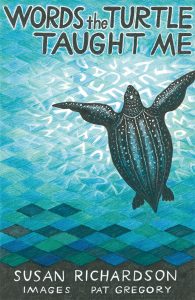 Combining poetry with the long essay, ‘Thirty Ways of Looking at the Sea’, which charts her involvement with the Marine Conservation Society as resident poet as they launched an appeal to tackle the threats facing thirty marine species, Words the Turtle Taught Me sees Susan Richardson writing at the height of her powers as a poet, an ecological campaigner and as a writer about the process of composing inventive, compelling poems.

Listen to Susan reading at a recent Cinnmamon Press event:

Susan Richardson’s work is a suspended state, caught between the us we presume to be and the species with which we share this watery, fragile planet. Cut and precise, archaic and innovative, transcendent and in-the-moment, she sees the life of the sea as a mirror of ourselves, and vice versa: always changing, always the same.

Philip Hoare, author of Leviathan & The Sea Inside

Richardson is adept at mixing wit with sorrow … [and believes] that creating beauty through artistic endeavours is an act of defiance against ‘the ugliness of human-induced extinction.’ … Words The Turtle Taught Me is a clarion call on behalf of the ocean and its creatures. It will appeal to those who are involved with marine conservation, but also others, like me, who are new to the subject.

The collection is illustrated by Pat Gregory.

Some rare, endangered Sundays, my mother
would let me unlatch her jewellery box
and pick one piece to wear. Didn’t bother
with the gold, oval locket holding locks
of my balding father’s hair, the red fox
brooch, or the bracelet with charms whose luck dried
up in The Drought: chose the shell with the shock
of the tiny seahorse confined inside.
Tried not to mind it had wrongfully died,
tried to believe I could rightfully hear
mermaids flirting, cod-song, waves of Beside
the Seaside when I pressed it to my ear.
Wearing it triggered an uneasy wish —
Please let me always feel free as a fish. 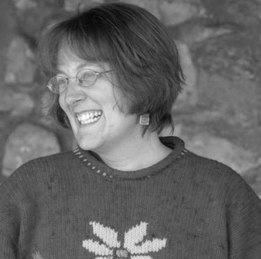 Susan Richardson is a poet, performer, educator and editor, whose previous collections with Cinnamon Press were Creatures of the Intertidal Zone and Where the Air is Rarefied and skindancing. Words the Turtle Taught Me, which was shortlisted for the Ted Hughes Award. Throughout 2018, Susan took her multi-media Words the Turtle Taught Me poetry show to venues around the coast of the UK. She performed in arts centres and beach cafés, at universities and Wildlife Trust Visitor Centres from Aberystwyth to Edinburgh, from Cornwall to the Isle of Man. The show continued to tour in 2019. Susan has been resident poet with the Marine Conservation Society and poet-in-residence with the global animal welfare initiative, World Animal Day. She has performed at festivals throughout the UK, for organisations such as WWF and Friends of the Earth, on BBC 2, Radio 4 and at universities both nationally and internationally. She co-edited the magazine Zoomorphic, a digital literary magazine that published work in celebration and defence of wild animals.

Find out more about Susan’s writing on her website.